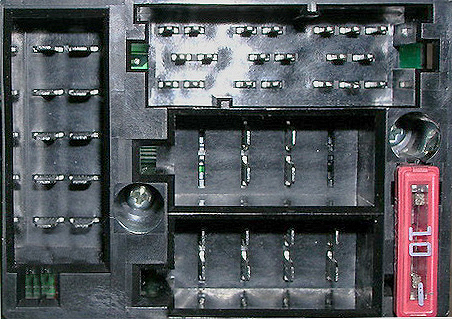 ISO 10487 defines a standard for connectors for the head unit to the car's electrical system, consisting of a system of up to four different connectors typically used in head units for car audio. ISO 10487 only defines the physical attributes of the connectors, not the pin/signal designations, which are manufacturer-defined.

The first connector A is always present, is usually black in colour (in cable), and contains pins for power-supply, off/on (typically controlled by ignition key), optional control for a motorised antenna and so on. The second connector B is for connecting four loudspeakers, front, rear, left and right, and cable connector is usually brown in colour. The connector C is optional. Some times, it appears in cable as one 20-pin connector, often red in colour, or it may be divided into three separate connectors which may be hooked together in cable, in which case C1 is usually yellow, C2 is usually green which C3 is usually blue in colour. The contact spacing is narrower than the other connectors, so the C connector is sometimes referred to as mini-ISO. The connector D is for satellite navigation systems. It has 10 pins.


Copyright © 2000-2018 by pinouts.ru team.
No portion of this webpage may be reproduced in any form without providing visible HTML link to Pinouts.ru