Where is the OBD-2 connector located?

The connector must be located within three feet of the driver and must not require any tools to be revealed. Look under the dash and behind ashtrays.

Two factors will show if your vehicle is definitely OBD II equipped:
1) There will be an OBD II connector as shown
2) There will be a note on a sticker or nameplate under the hood: "OBD II compliant".

The SAE J1962 specification provides for two standardized hardware interfaces, called type A and type B. Both are female, 16-pin (2x8), D-shaped connectors, and both have a groove between the two rows of pins. But type B has the groove interrupted in the middle, so you can't plug a type A male connector into a type B socket. You can, however, mate a type B male plug in a type A female socket.

The type A connector (shown) is used for vehicles that use 12V supply voltage, whereas type B is used for 24V vehicles and it is required to mark the front of the D-shaped area in blue color. 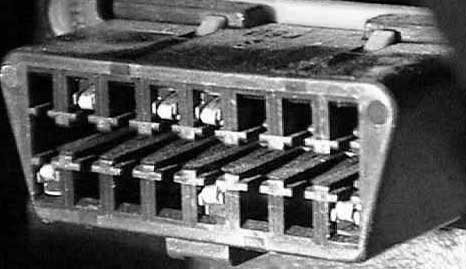 The pinouts for the 16 pin J1962 OBD-2 car diagnostic connector are:

Copyright © 2000-2022 by pinouts.ru team.
No portion of this webpage may be reproduced in any form without providing visible HTML link to Pinouts.ru